And my third layout with the Sept kit...

...from Cocoa Daisy... The kit goes on sale for non-subscribers on the 1st!

This is about how I wish I was better at staying positive. I tend to complain too much and I wish I was better at always focusing on the positive side of things. Well, almost always. :) I wrote a little about this and hid my journaling in the little envelope. I stamped "She said" on the envelope and also on the photo. I think the stamping came out like that on the photo because the ink partially dried on the stamp before I pressed it down - a mistake, but I like it. :)

I glued down the papers and added some gesso to soften the patterns. I added machine stitching and I glued the twine down around the photo. I also splattered some green acrylic paint over the background (Jenni Bowlin dabber, Stick Candy) and painted the tiny girl with the same paint.

The envelope and some stickers are from the "His" add on. I used one of the BG snippets from the "Hers" add on too. The twine came with the embellishment pack. 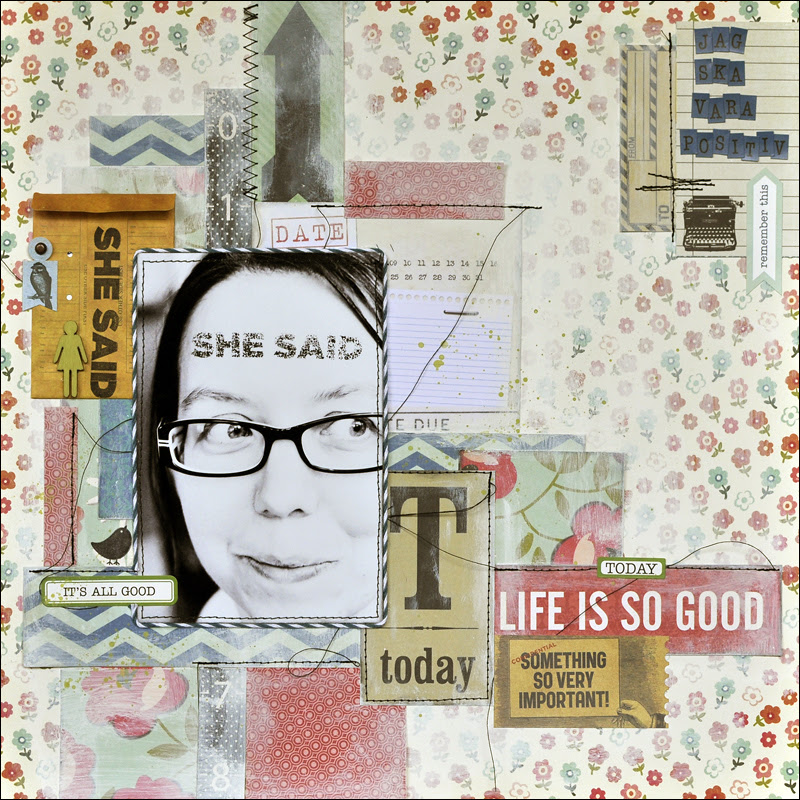 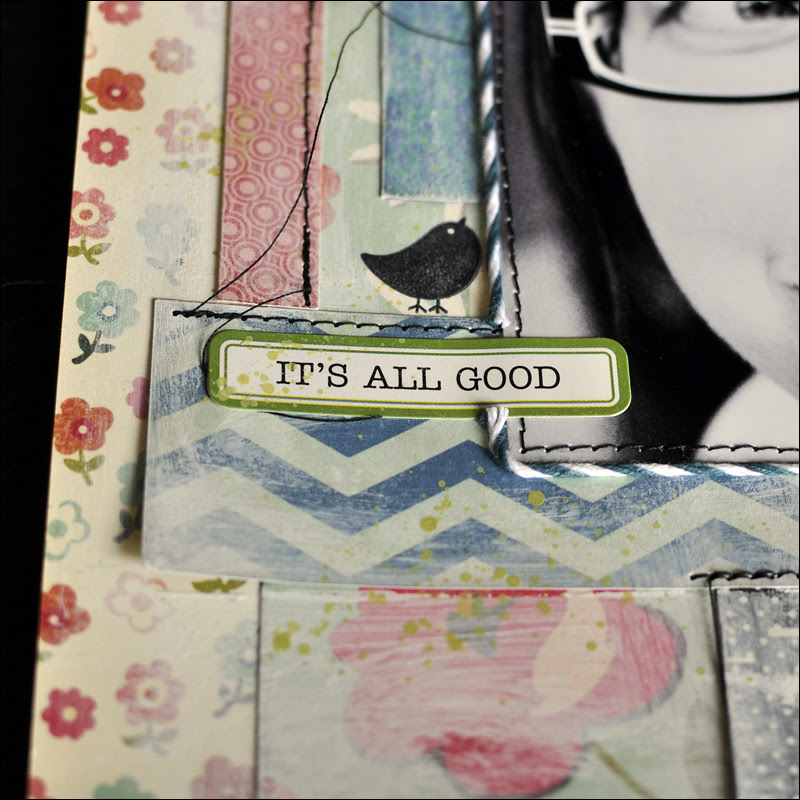 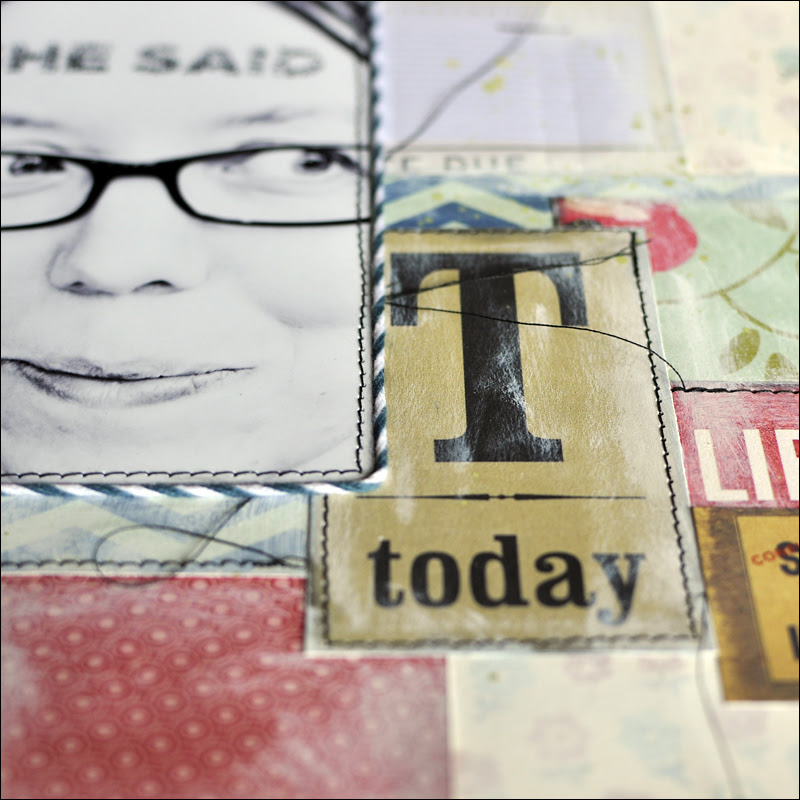 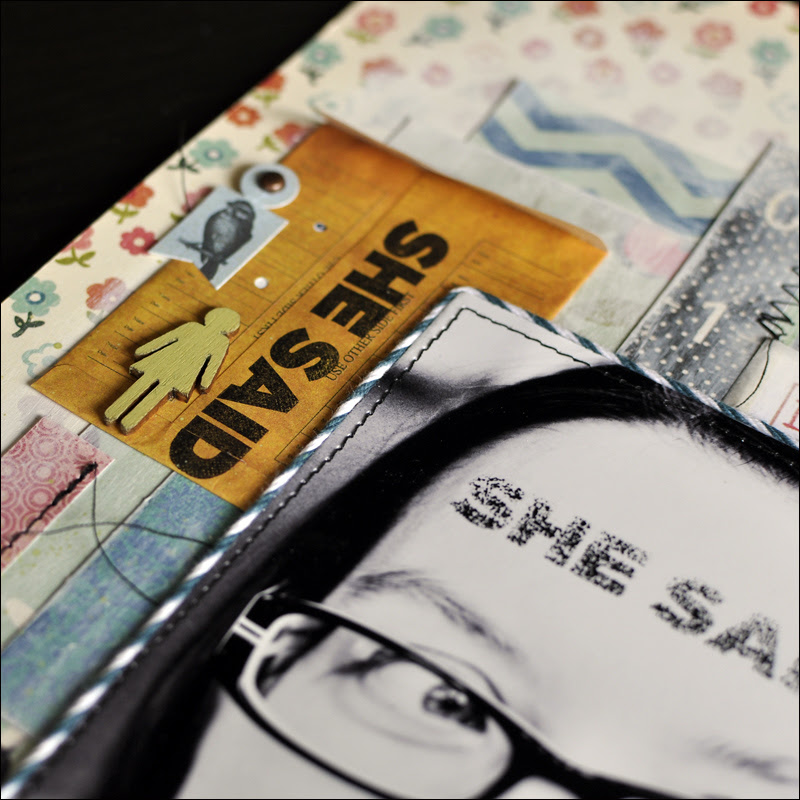 First, a layout where I used the Embellishment pack. The green letter stickers are from the "Hers" add on. The chipboard girl is from the Embellisment pack and I painted her white and then used the Herringbone stencil from Crafter's Workshop to heat emboss, using Zing Embossing powder.

The photos are from Alva's first day of school last week. I'm so glad she is having fun at school! Linus and she is at the same school this year and they both love that they're able to say hi to eachother every now and then during the days. I think it means so much to Alva having her big brother at the same school. It also means that she knows many of the older kids because they are Linus' friends.

Linus was supposed to stay at this school for another 2 years after this one. When we moved here the school was for kids at the ages of 6-12 but about a year ago they decided to reorganize the schools where we live, and that means the kids have to change school when they're 9-10 years old and Linus has to go to another school next year, further away from home. :( It makes me so very sad. We tried really, really hard to stop the reorganization, but despite the fact that none of the parents wanted this... they went through with their plans.

I'm so happy they at least get this year together. 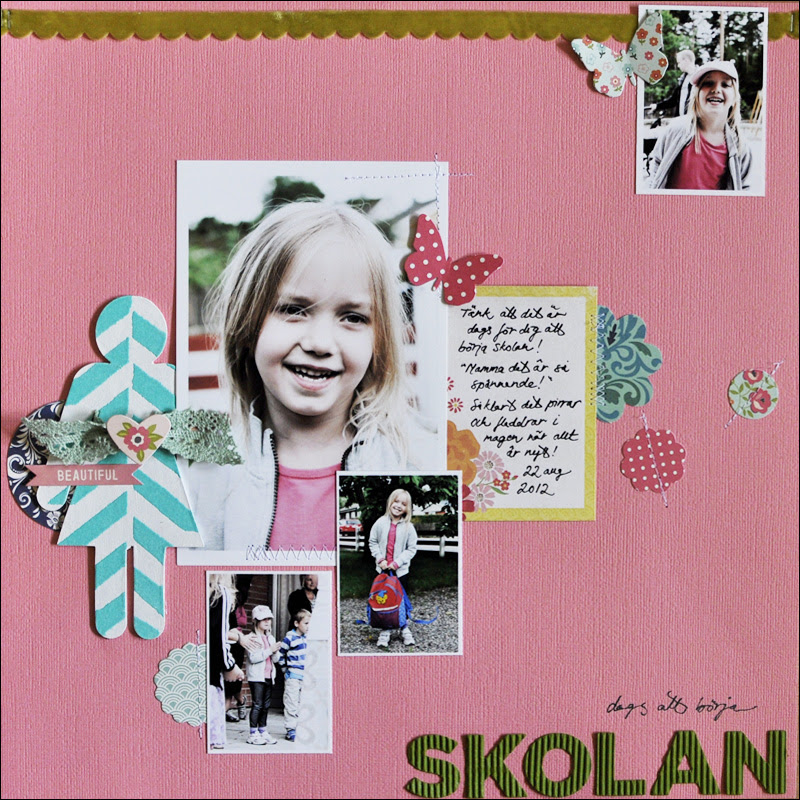 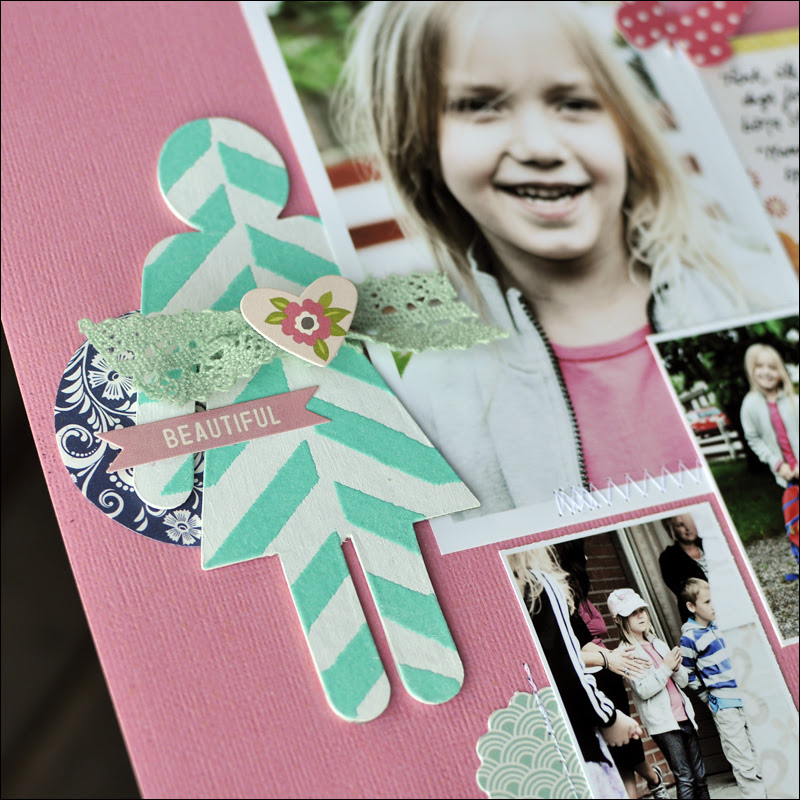 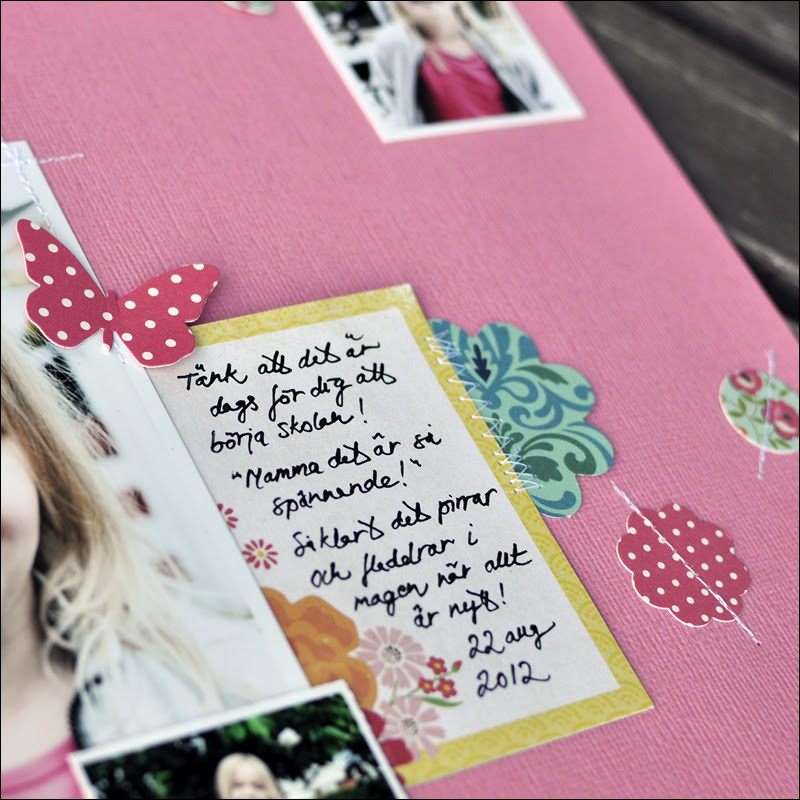 My second layout is about Tuva. She took her first steps in the beginning of August but when I took this photo she was still mostly standing still. The twine and the dies cuts are from the Embellishment pack and the "this moment" sticker is from the "His" add on. 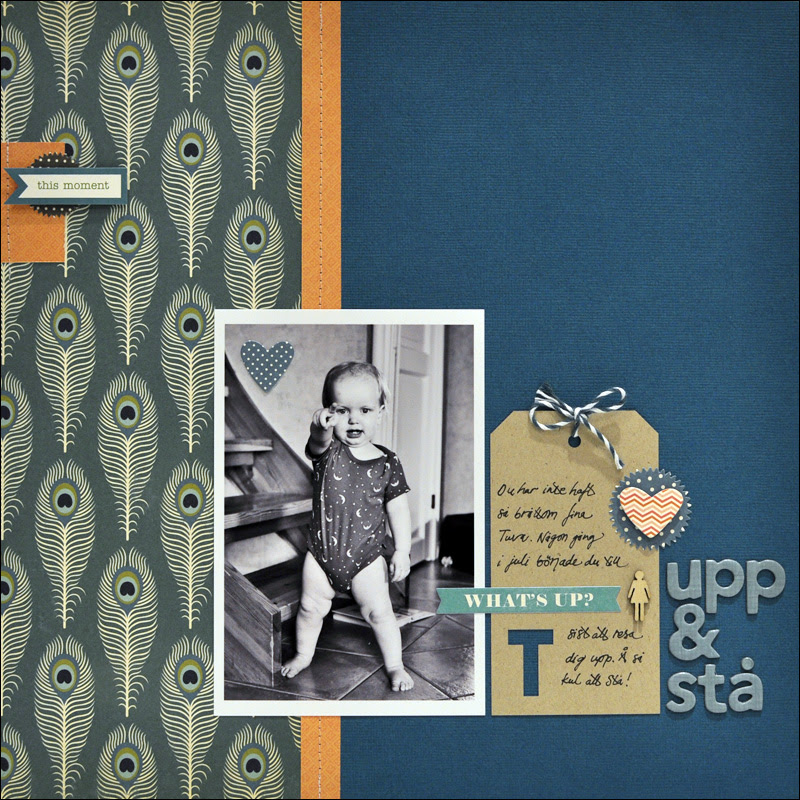 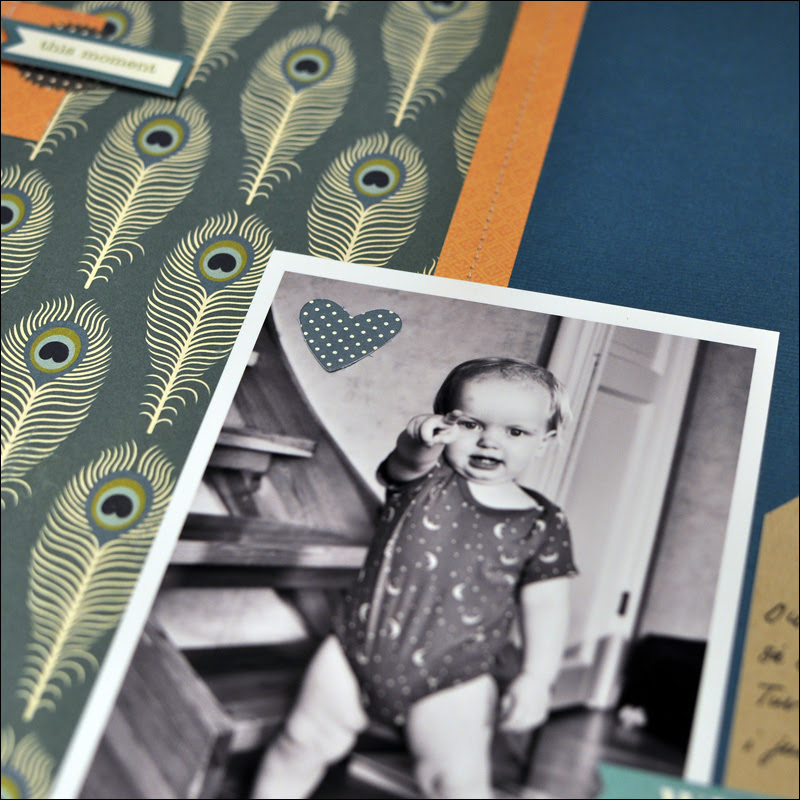 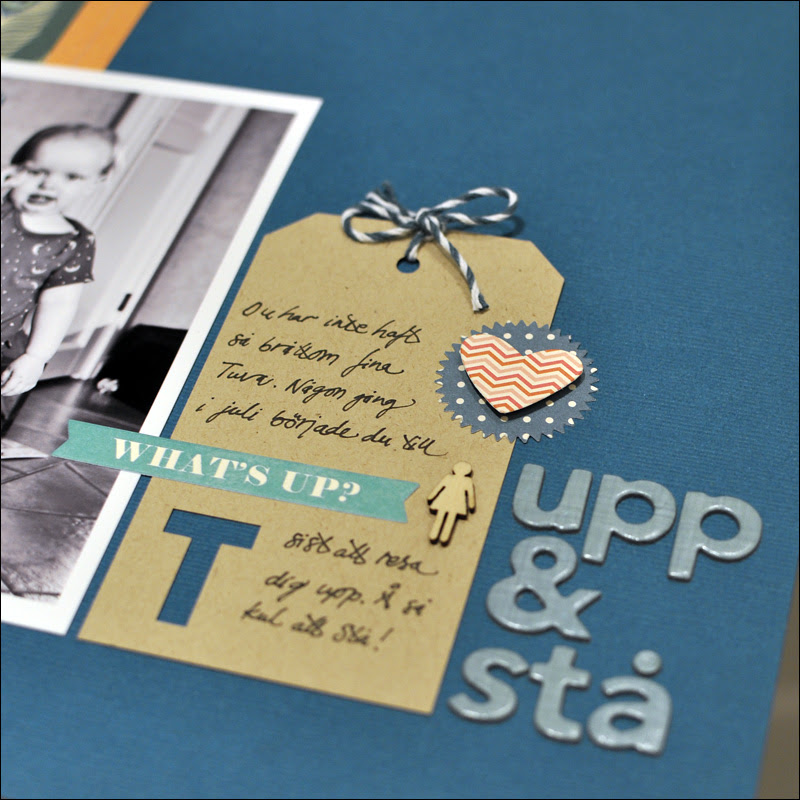 The Cocoa Daisy Reveal is taking place tomorrow...! Please join in on the fun on the message board. If you want to make sure you never miss out on the news, sign up for the newsletter - there's a sign up box at the bottom of the main Cocoa Daisy page.

The September kit is called He Said, She Said and I think this is one of my favourite kits ever! I have this little sneak to share... :) 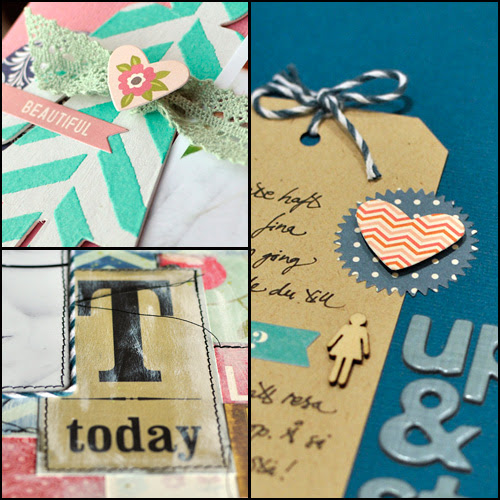 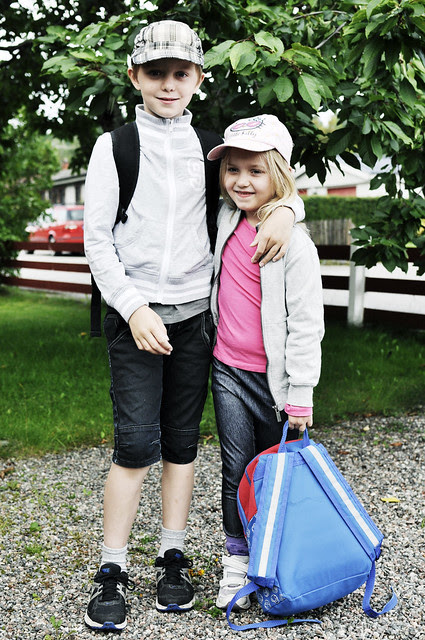 I haven't been very busy in my art journal lately and I'm a bit sad about that. I really hope to change it and journal more often again. I do have a couple of old pages to show you, though. They aren't pretty or gorgeous, but I was thinking they still might be inspiring to someone. :) 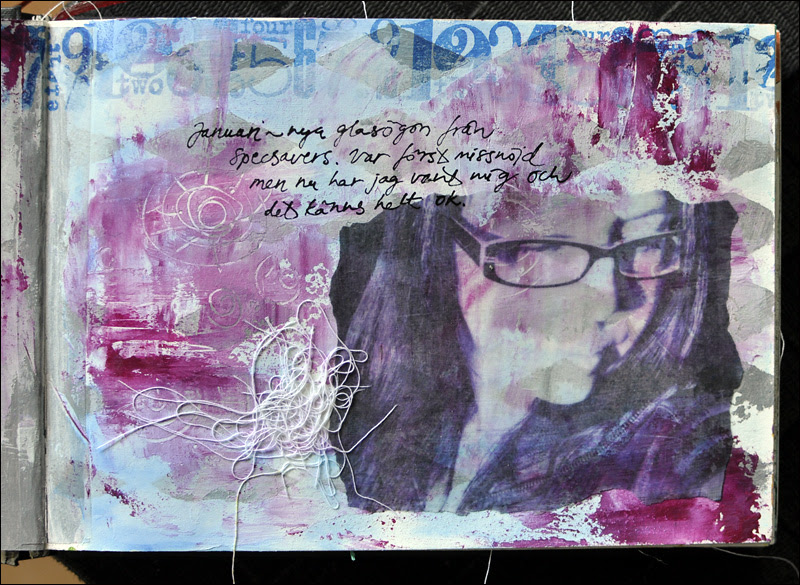 "The sound of the silence" 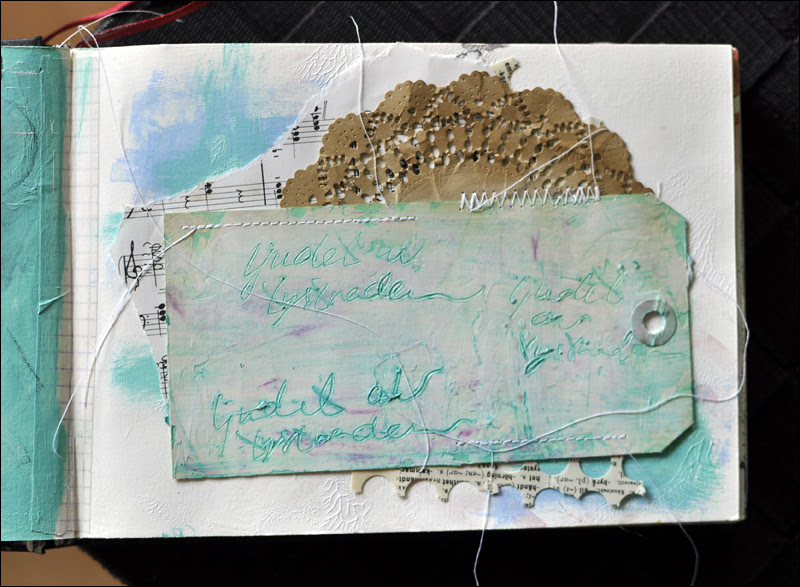 We are creating with Texture Paste over at the Tattered Angels inspiration blog this month. This is the second canvas I created for the CHA booth, with the same type of butterflies that I had on my other canvas.

Here I used mainly the non-glittery mists from Tattered Angels - Plain Jane Simply Sheer. As much as I love glimmer, I love this look too! I used the colours Taupe, Burlap and Pink (for the flowers). The butterflies were both misted and then coloured with Glimmer Glaze - Icicle and Cowboy. The chipboard pieces were also painted with Glimmer Glaze Icicle.

I used a 6x6 chunky stretched natural canvas and some cord/jute rope from Canvas Corp. 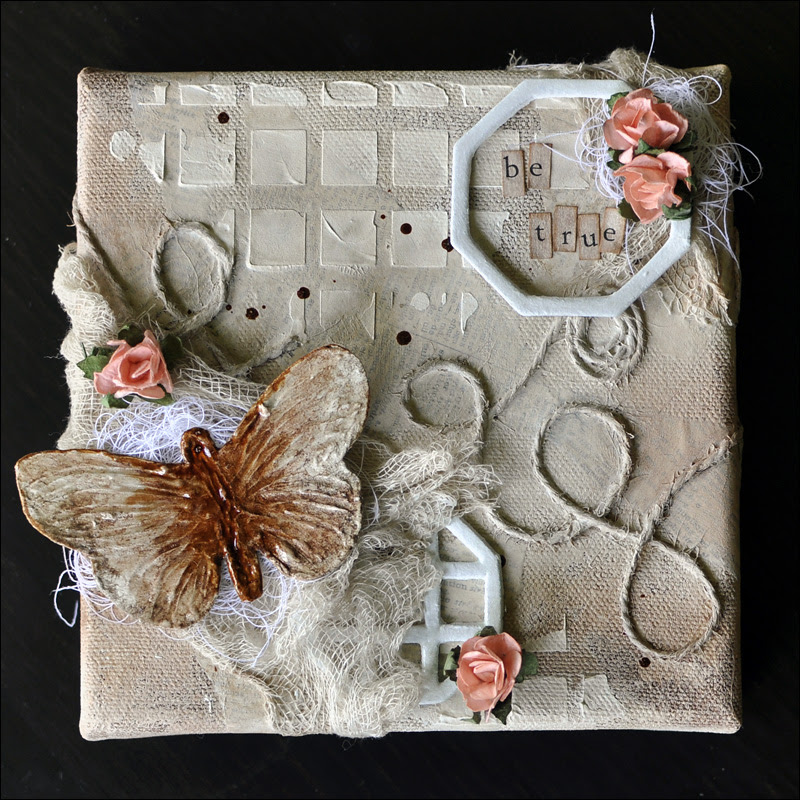 I have also put together a journal, and I used texture paste to create my cover. I misted the cover with Chalkboard Mist Black Orchid and Glimmer Mist Aquamarine. To finish off, I splattered some Glimmer Glam Chandelier on top. The rings were painted with Glimmer Glaze Chianti. 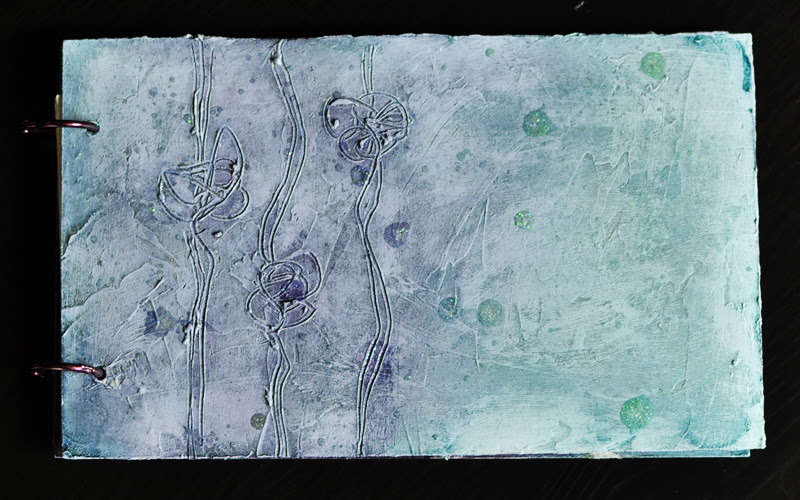 The September Sketchbook365 challenge is up - go here to check it out! It's a very fun sketch by the awesome Emma Stafrace and I loved to challenge myself with this design!

Tuva is so fun right now. She is standing up all the time, walking around the furniture. Every now and then she also takes a small step or two without holding on to something, but she still needs some practice. :) Lot's of laughing and playing and even more laughing. My sweet little one, growing up so fast. 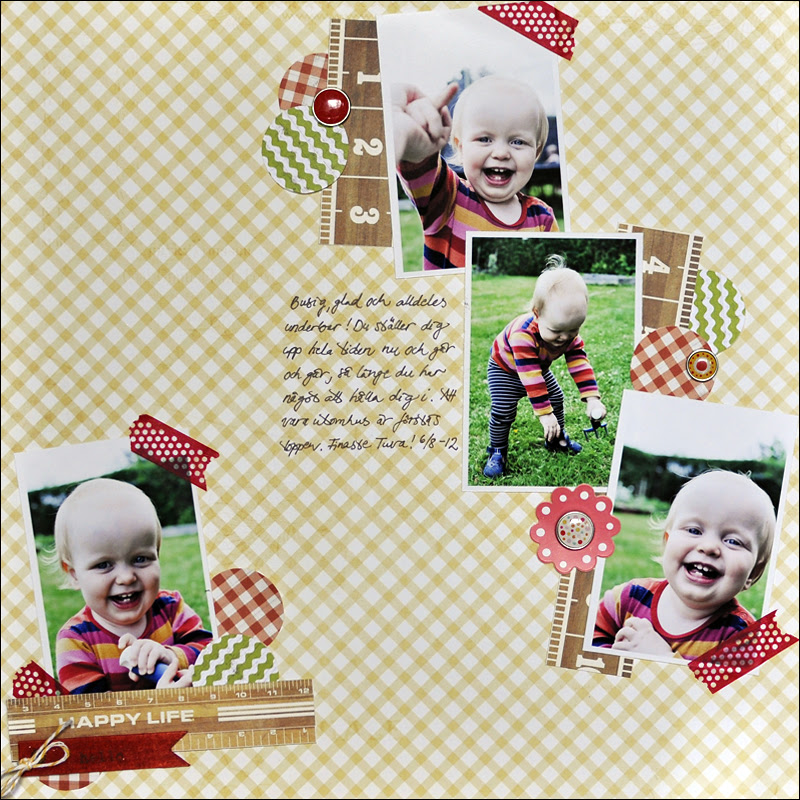 Here are the first sneaks of the Cocoa Daisy September kit - He Said, She Said, and add ons. I am in LOVE with this kit and can't wait for it to arrive! 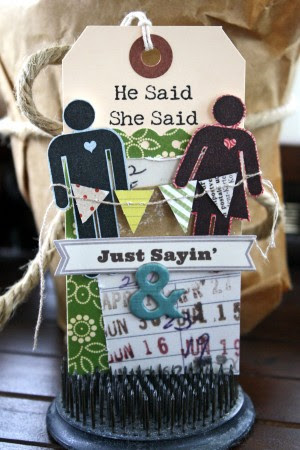 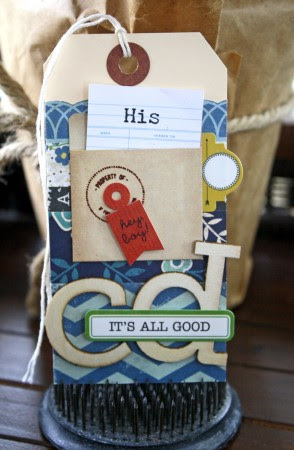 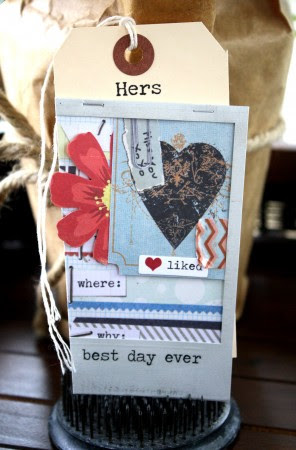 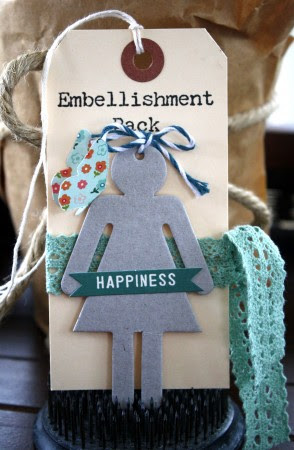 The patterned paper add on: 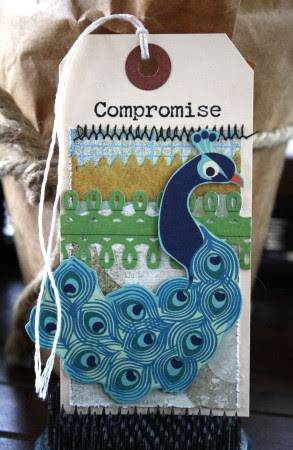 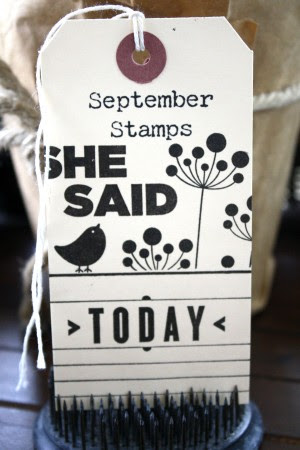 AND... in celebration of Christine's 2nd Anniversary with Cocoa Daisy, there's a special offer for you: 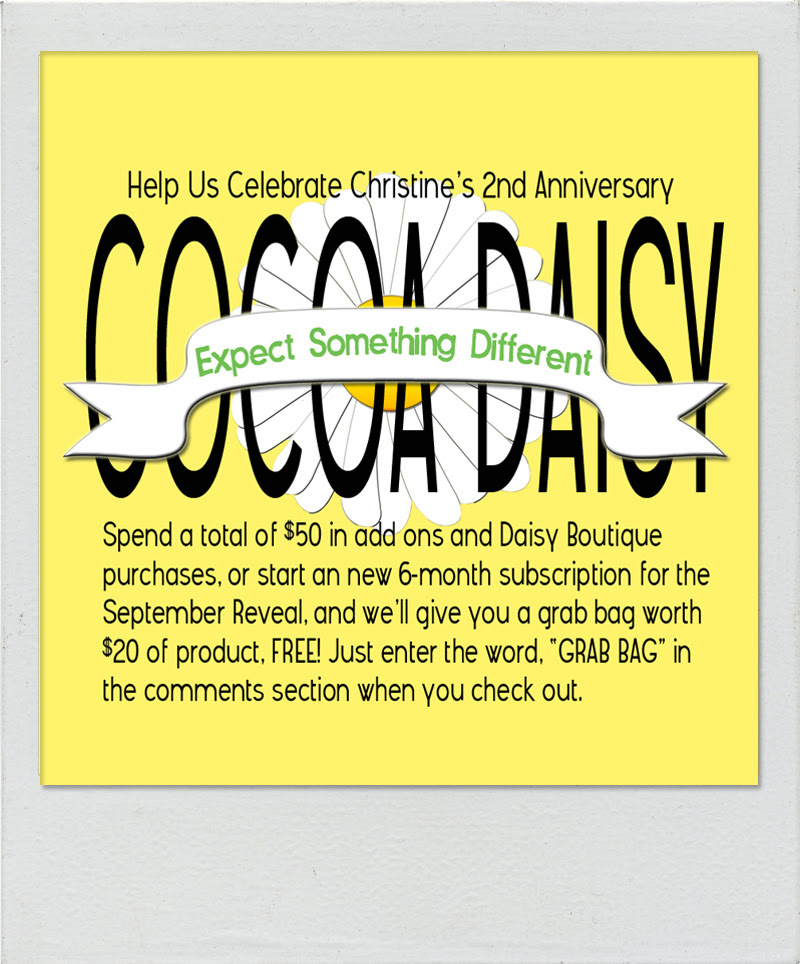 Do you love sketches? We have a new sketch challenge over at Cocoa Daisy, each month. Everyone is welcome to play along - subscriber or not! I made the sketch this month, and here is my layout, using the August kit... You can find the sketch and the challenge here.

The photo is from my brother's wedding, earlier this summer. 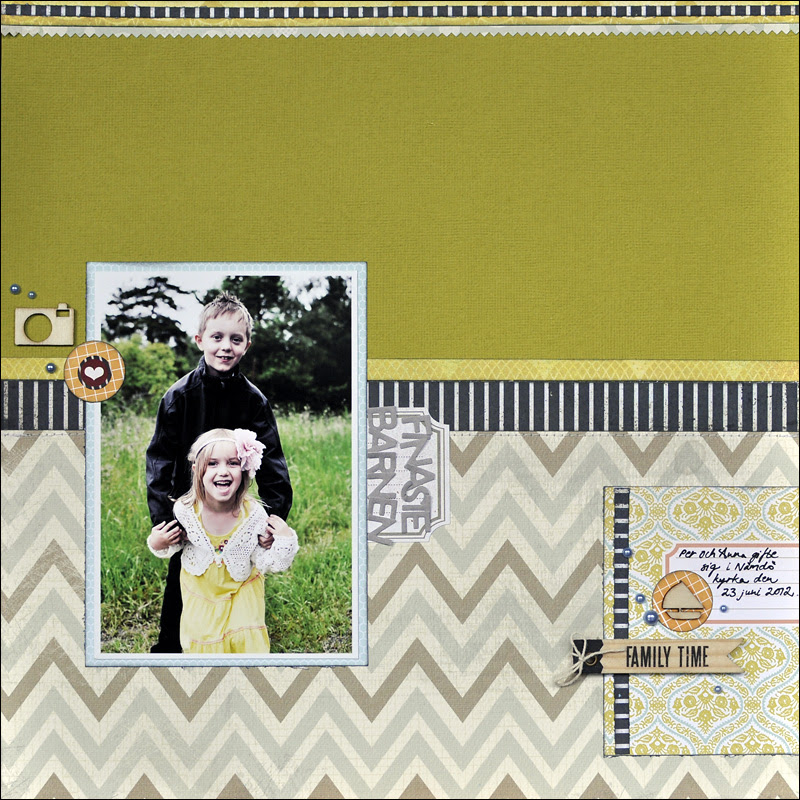 Our modem broke down and we've been without internet for a few days. I'm so glad I have the phone and could check my e-mails etc... but *phew* it's a relief to have "real internet" back. :)

Canvas for the Tattered Angels booth at CHA...

I was very happy to get the opportunity to create a couple of canvases for the Tattered Angels booth at CHA in Chicago earlier in July. (Thank you sooo much Mia and Per for bringing the canvases to the show!)

This is the first of my two canvases, using a 6x6 stretched chunky canvas from Canvas Corp.

The background is misted with Glimmer Mist Graphite - one of my early favourite colours of mist that I still love so much. The lace was misted too, using Chalkboard Glimmer Mist Chalk. 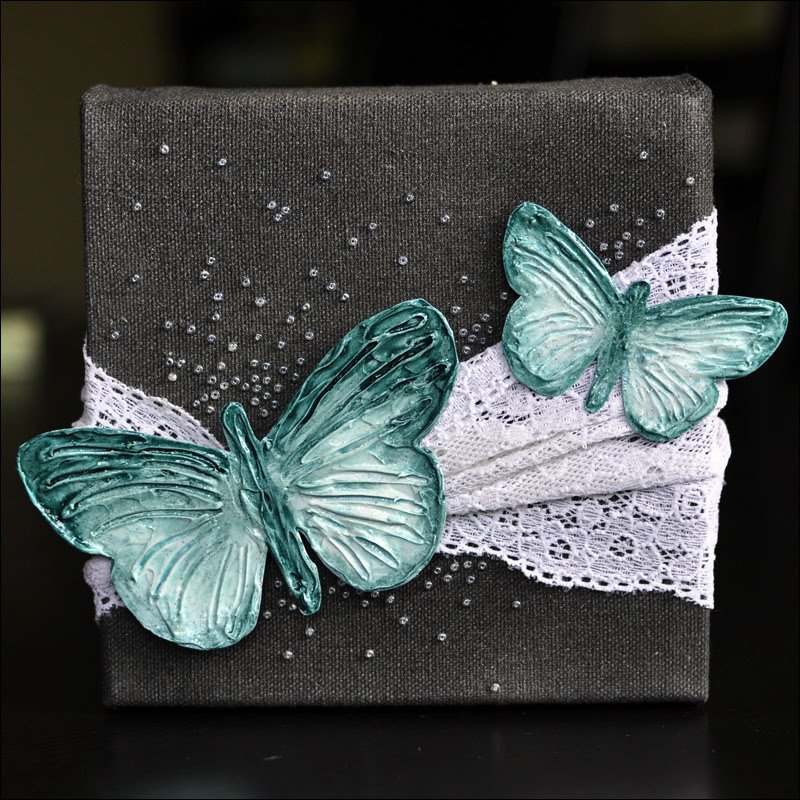 I created the butterflies using modelling paste. They were then gessoed and coloured with Glimmer Glam in the colours Caspian Sea and Tide Pool. I really loved how the butterflies turned out. I finished the canvas off by adding lots of tiny seedbeads. 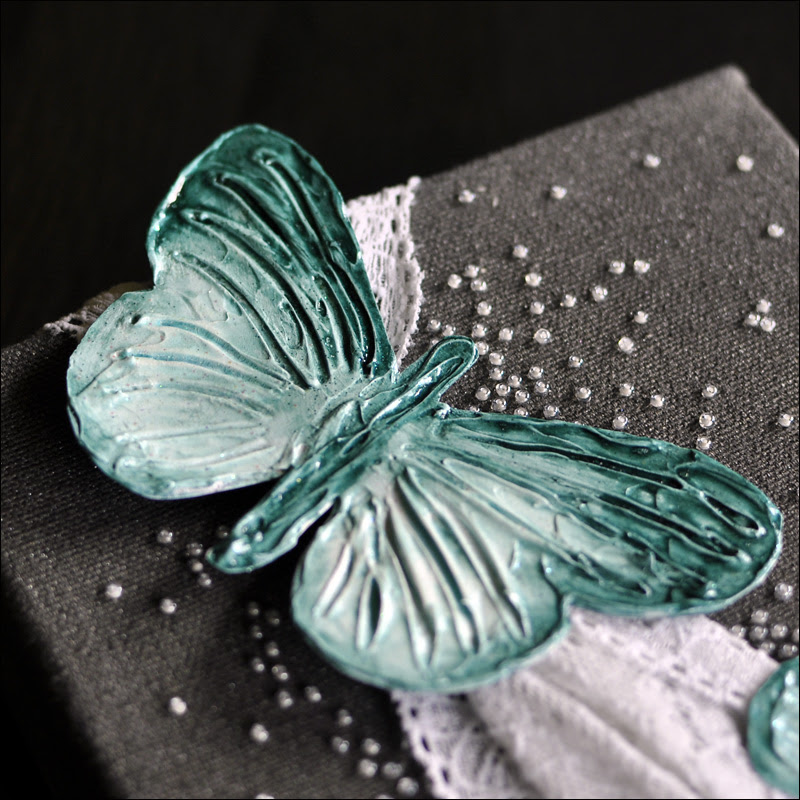 AnnaB
I love to scrap, paint, play and create a mess. I live in Strängnäs, Sweden. Welcome to my blog! If you have any questions, please send me an e-mail: zoegakatten (at) yahoo(dot) se